Meatless Mondays in February - Join us!

At Sifted, we care about the bigger picture. Providing amazing service and delivering delicious lunches is important, but we also care about our impact on the health of our eaters and our environment around us. To do our part, we’ve made it our resolution to offer healthy and environmentally friendly policies to our partners. The first program we are offering is a Meatless Monday option for the month of February. Let your lunch coordinator know if you are interested in joining us.

Meatless Monday isn’t a new idea. It is a campaign that was originally started during World War I to help the U.S. people do their part to reduce food consumption and help supply the troops overseas. It returned during World War II for the same reasons and was continued after the war to help support the European countries that were struggling to recover.

In 2003, the Meatless Monday campaign was brought back by the Johns Hopkins Bloomberg School of Public Health. Their goal this time was to reduce preventable diseases that were on the rise in the U.S. like heart disease, stroke, and diabetes, all caused by meat consumption.

Americans nowadays are eating 75lbs of more meat each year than the previous generation.

In 2009, the effects of meat consumption on the climate was added as a benefit of Meatless Monday. One year later, San Francisco became the first city in the U.S. to declare Mondays to be “meat-free.”

Why Monday? Research has shown that Mondays are the start of a new week’s cycle, so any changes made on Monday tend to carry on through the week more than any other day. By not eating meat on Monday, you are more likely to choose to go meat-free for additional meals that week. As a resolution, Sifted wants to partake in the Meatless Monday campaign and get as many of our partners to join as well. For four Mondays, (Monday, February 4th to Monday, February 25th), Sifted is offering an optional Meatless Monday program.  If you are interested in participating, reach out to your lunch coordinator and let them know.

What kind of impact can Sifted and their partners have on the world? Check it out 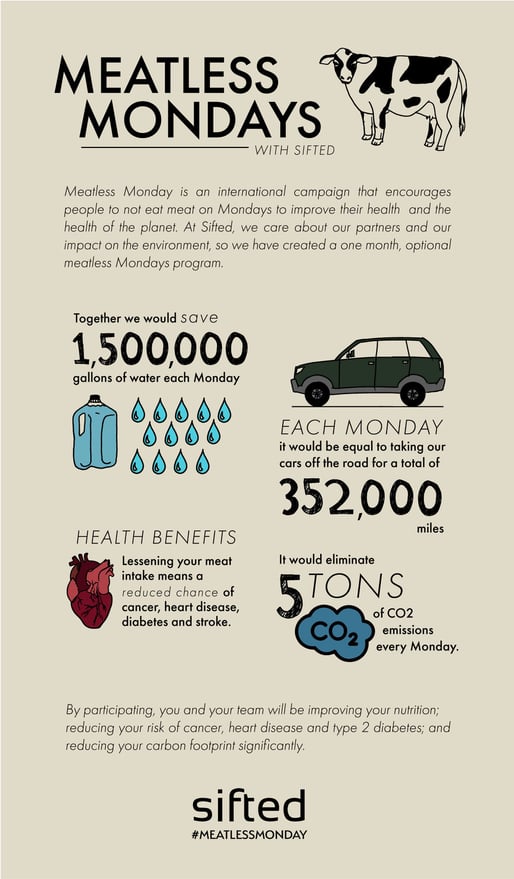